Change and Development in Industrial Society

Change and Development in Industrial Society

Compare some of the points related with speciality of Indian Industrialisation with western pattern.

(i) The experience of industrialisation in India is in many ways similar to the western model and in many ways different. Comparative analysis of different countries suggests that there is no standard model of industrial capitalism.

(ii) Let us start with one point of difference, relating to what kind of work people are doing. In developed countries, the majority of people are in the services sector, followed by industry and less than 10% are in agriculture (ILO figures). In India, in 1999-2000, nearly 60% were employed in the primary sector (agriculture and mining), 17% in the secondary sector (manufacturing, construction and utilities), and 23% in the tertiary sector (trade, transport, financial services, etc.)

(iii) However, if we look at the contribution of these sectors to economic growth, the share of agriculture has declined sharply, and services contribute approximately half. This a very serious situation because it means that the sector where the maximum people are employed is not able to generate much income for them. 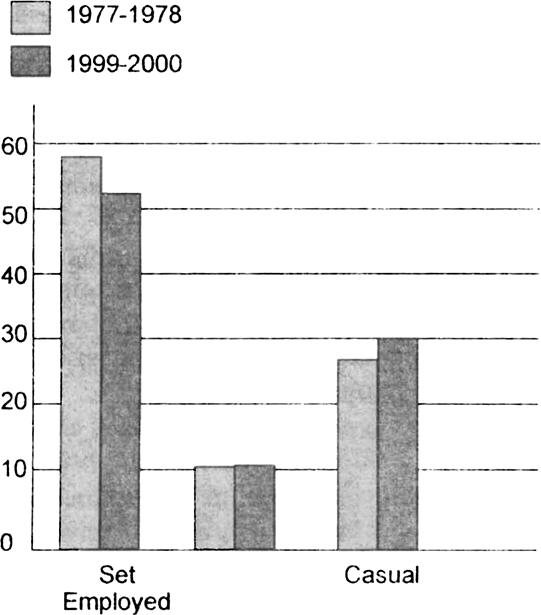 (iv) Another major difference between developing and developed countries is the number of people in regular salaried employment. In developed countries the majority are formally employed. In India, over 50% of the population is self-employed. Only about 14% are in regular salaried employment, while approximately 30% are in casual labour (Anant 2005: 239). The adjacent chart shows the changes between 1977-78 and 1999-2000.

More Chapters from Change and Development in Industrial Society