Given below is an experimental setup to study a particular process. 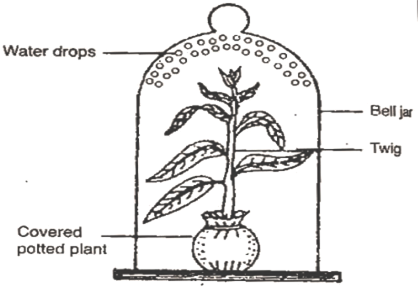 (1) Name the process being studied.

(ii) Explain the process named in (i) above.

(iii) Why Is the pot covered with a plastic sheet?

(iv) Mention one way in which this process is beneficial to the plant.

(v) Suggest a suitable control for this experiment.

(i) Transpiration.
(ii) Transpiration is the process in which water in the form of water vapour is lost
from the aerial parts of the plant such as the leaves and soft stems of the plant. A small quantity of water absorbed by the roots is actually used by the plant body.
The rest of the water is lost through transpiration. Transpiration helps to cool the
plant. It also helps to regulate the temperature of the surrounding area.
(iii) The pot is covered to prevent the escape of water vapour from it and check for the process of transpiration.
(iv)Transpiration creates a suction force and thus helps in the ascent of sap in the plant. Increased transpiration results in more water and minerals being absorbed from the soil by the root hair cells.
(v) A suitable control for this experiment would be a pot without a plant covered with a plastic sheet and kept in the bell jar.